I was so impressed by the nursing degree students I met on UEL's programme. The programme itself really draws on the students' enthusiasm and reflects the diverse nature of this area of London.

"Funding your own nursing degree is a huge vote of confidence not just in yourself but in nursing as a career," said UEL student Nikki Ewura.

She is one of the first cohort of student nurses who embarked in January on this new programme. Previously, she was a medical receptionist in Whipps Cross hospital for about four years but had wanted to be a nurse since arriving in the UK from Ghana as a teenager to look after her sick aunt.

Nikki learnt from the nurses involved in her aunt’s care. She also found she really enjoyed caring. While at Whipps Cross, her colleagues noticed her patient-focused approach and the matron in her department encouraged her to apply for an 'access to nursing' course then a nursing degree. 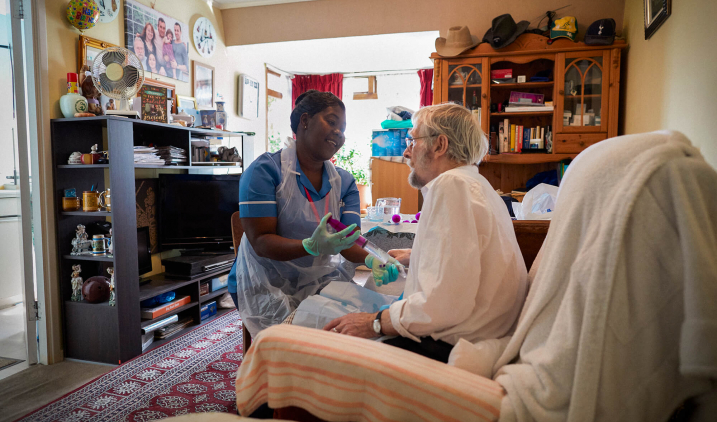 "The course so far has been excellent and the teaching is fantastic. I’ve really learned a lot from my placement n a respiratory ward and I also had the privilege of taking part in the Florence Nightingale celebrations in May," said Nikki.

As a single parent with a 13 year-old daughter and bills to pay, Nikki had to take out a student loan. Despite understanding the investment needed, she knows that longer-term, she'll reap the rewards. It helps that her daughter Shenyce is happy about the new career her mother is embarking on. She can see how much Nikki is already getting out of it.

Nikki is keeping an open mind about which direction to take, waiting until she has completed all her placements. "I’m excited and looking forward with confidence to wherever my career will take me."

Fellow student Donnette Murphy also had initial concerns about taking on the financial commitment at the age of 45. "It felt a bit intimidating to take up a loan to study because most people at my age are probably looking to pay off debts and plan for a pension."

But after 20 years working in finance, Donnette felt the call to go into nursing was too strong to ignore. She had always been drawn to a caring career – not only because she found volunteering with homeless charities so rewarding. As a patient herself on occasion, she had also experienced admirable nursing care and longed to do the same.

"It was the nurses that helped me recuperate and recover my health and that’s something so valuable that money can’t buy. Nursing is a profession I've always admired and wish I’d been able to choose that pathway when I was younger. But my parents couldn’t afford to continue with my education so I went out to work to help the family, got a job in finance and studied at evening class to get accountancy qualifications."

It is a lifetime career with so many options you can take, but you’re always making a difference to people’s lives.’

However, when her company planned to move out of London, Donnette, from East Ham, had the option to take redundancy. "It felt to me like the perfect opportunity to pursue a nursing degree," she says. "I saw that UEL was offering this course and it’s local to me, so I don’t have to travel far for studies or placements."

So no regrets? Donnette is loving it and is finding she is learning so much not just on the academically but also on her placements in acute and community settings.

"For anyone considering a similar move, I would say that the rewards both mentally and job-wise are great. It is a lifetime career with so many options, but you’re always making a difference to people’s lives."

"The programme was set up in partnership with North East London Foundation NHS Trust (NELFT) and Barking, Havering and Redbridge (BHR) NHS Trust," says Nigel Davies, Head or Nursing at the BHR NHS Trust. He has day-to-day responsibility for the programme and his experience of the students is that they are all passionate about the course and where it will take them.

"While paying the fees might be a stretch for many of them, they do clearly view it as an investment in their future" he says. "And to date there has been zero attrition from the course, which underlines their commitment as well as being a tribute to the teaching and pastoral support offered by the UEL."

"Now local students who are interested in gaining a healthcare degree don’t have to travel far from home – our hope and that of our partner trusts is that they are much more likely to stay and work in the local community once they are qualified," Nigel says.

Opening up routes into nursing

Students are required to have A-levels or a BTEC qualification, or to complete an Level 3 access to nursing qualification along with numeracy and literacy skills. ‘'If candidates meet these requirements, we then use values-based recruitment at interview," Nigel explains.

"The proposal for such a self-funded route came about two years ago following discussions between us, UEL and other local NHS trusts as we were planning to increase our student numbers and tackle vacancy rates."

When the course was first promoted, there was an overwhelming number of applicants, with 85% from a BME background and most of them from the local area.

Changes introduced in September 2017 gave universities the freedom to develop courses tailored to local need, rather than responding to commissioned places. This helped UEL tackle concerns from local NHS partners that student nurses didn’t stay after qualifying with many only studying at the university rather than living locally.

Students on the first cohort of the new programme are primarily older than the usual student with an average age of 30. "The hope is that as they are drawn from the local area and have roots and connections here so they will stay and work here. Our ambition is to contribute to the workforce in East London where there is an acute need for nurses and healthcare practitioners," Nigel explains.

"The cohort has very diverse ethnic origins with most students being from Black African or African Caribbean descent, with a smaller number with South Asian heritage. There is an almost equal divide between those who are second or third generation in the UK. Other students are from newer migrant groups who have been in the UK for one generation, and finally a small number from eastern Europe. This first cohort of students was all female but the second cohort who started in September has five men. We are also reviewing our recruitment to see if we can attract more male students from BME backgrounds."

Half of students' time is spent in practice so local partnerships between the NHS  and UEL are crucial. There is a real need to make sure the number of placements match the number of university places. UEL has committed to take 120 students a year – 60 for both NELFT and BHR NHS Trust - in the initial arrangement. More recently, UEL has agreed to a third NHS partner (Bart's Health) and will take on an additional 40 adult nursing students a year.

Placements are split 50/50 between the acute sector and integrated community/mental health services. Starting in the Spring, students spend the first 12 weeks of the course at university with the following eight weeks on placement. After a summer break in August, students are back in September with rotations to other placements in partnering NHS trusts. A large proportion of students also have prior care experience, as an healthcare assistant for example or as a family carer, reflecting the maturity of the students.

Apprenticeship routes for nursing associates have also been developed and will be starting at the end of 2018 with degree apprenticeships starting in March 2019.

Building the workforce from within

Pro Vice-Chancellor Professor Fary Cachelin, dean of applied health at UEL says the numbers recruited reflect both the local need and the level of local interest. "Because they want to build their workforce from within, our partner NHS trusts urged us to develop a pathway with a number of options for entry, including for people with previous healthcare experience."

There was already substantial interest in the UEL's standard pre-registration course but the university took a decision to see if they could open up other routes.

"From the student's point of view, if you have invested your time, effort and money, but need to step off, you won’t have wasted your time and can step on again and leave with a useful degree," Fary says.

Find out more about career in nursing

For more information on starting your career in nursing, including the routes in and where to find courses,visit our nursing careers pages.