Working alongside regular armed forces personnel and other healthcare professionals from around the UK is what Hannah loves most about her reservist role. 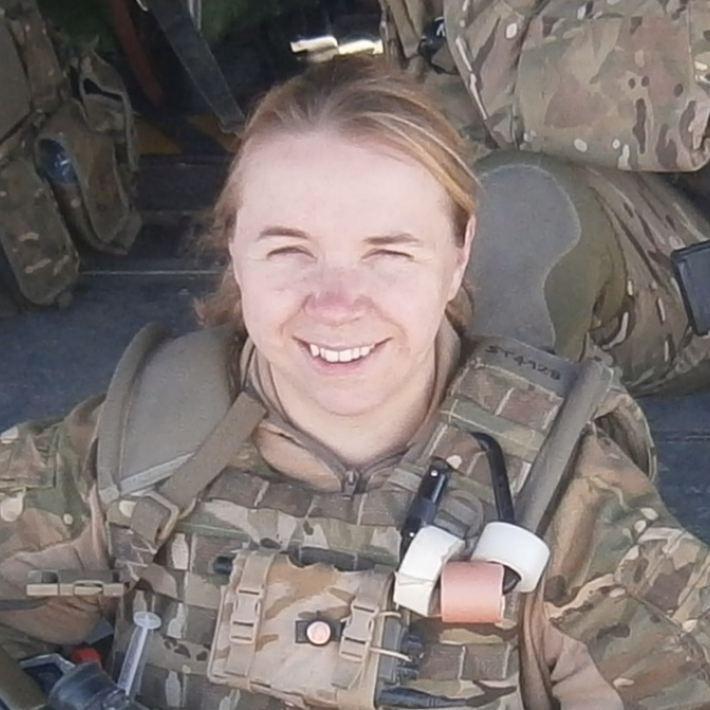 I have a military background from my three years in the Army when I left school. A few years later, when I finished my paramedic degree, I looked at joining the reserves as I felt my paramedic skills could be put to good use in military operations, in particular Afghanistan. I joined the RAF reserves in August 2009 and, after initial training to become acting corporal, I was mobilised to Afghanistan in November 2011 for three months as a paramedic on the Medical Emergency Response Team, working on a helicopter based at Camp Bastion.

My initial training took place over four weekends and a two-week course at RAF Halton where I learned lots about RAF planes and helicopters! Weapon handling, shooting, drill and CBRN (training in a chemical environment) were also included. I then joined the squadron to learn some battlefield first aid tactics. In the reserves, we keep up our military skills through refresher training three times a year, as well as medical training and learning new skills on various courses.  We do a minimum of 6 weekends per year and a 2 week camp or training course. Before going to Afghanistan I completed an additional 14 weeks of training including an intensive two week course with the RAF Regiment which gave me the specific military skills I was going to need.

I love being a paramedic, particularly working at events such as the marathon, Notting Hill Carnival and New Year’s Eve celebrations, and I was very involved in planning and delivering London Ambulance Service's part of the Olympics. Having completed my foundation degree in paramedic science in 2008, I began work as a paramedic and was promoted to clinical team leader in 2011.

As a reservist, I love working alongside the armed forces 'regulars' and other healthcare professionals from around the UK. I've had excellent military training and attended some great conferences too.

My tour in Afghanistan was very fulfilling as I was part of the team treating some very seriously injured casualties; our interventions were a key part of their survival. The treatment and care delivered to casualties is amazing out there, starting with the troops on the ground getting treatment started very quickly under very difficult circumstances - paramount to the survival of so many. In the helicopter we sometimes had three seriously injured casualties for the team to look after which was extremely challenging. Working as a close team meant we had excellent peer support and were able to reflect on and discuss the cases we had been to.

I learnt such a lot from Afghanistan. It gave me a much greater understanding of trauma care and about working in a team of different professionals. It was also great to liaise with the hospital staff to find out about how patients were doing and to learn about other roles, and I have been able to pass on what I learnt to my NHS colleagues.

My managers were very supportive while I was away and sent me cards, emails and a parcel of goodies! They recognise the benefits that my training and experiences bring, especially when training others. They offer me a week of special leave on top of my annual leave to undertake my reserve forces training, which is obviously really useful.